“Well-drawn characters, a plot with many strings to unravel and plenty of appealing cats make this another winner.”

When cats start getting sick, feline-loving freelance writer Theda Krakow suspects an accident is to blame. But her shelter-owning rocker buddy Violet claims the contaminated kibble was poisoned.

When cats start getting sick, feline-loving freelance writer Theda Krakow suspects an accident is to blame. But her shelter-owning rocker buddy Violet claims the contaminated kibble was poisoned.

When Theda starts looking at shelter politics, she finds a litter of suspects. The city shelter may be backing down from a healthy pet initiative, and a series of threatening letters suggests a darker motive. Old-fashioned jealousy may factor in as well. The pressure mounts as Theda’s editor grabs onto the idea of a hot story – and dangles a prime job as bait. But how can Theda investigate when feelings, and felines, run so high?

As the music scene rallies to raise funds to save the cats, Theda finds herself on the outs with both her friends and her long-time boyfriend Bill. And when she’s caught at a murder scene, bloody scalpel in hand and only her beloved cat Musetta as a witness to what really happened, Theda must scramble to find the real killer before she and Musetta become the next victims.

Endorsements
Music journalist Theda Krakow once again proves a feisty and determined sleuth in Simon's lively fourth cat-themed mystery (after 2007's Cries and Whiskers). Theda alternates between the cat world, dominated by her pet, Musetta, and the Boston area music scene, about which she writes for local magazines and newspapers. When her retired policeman boyfriend, Bill, buys into a successful club that's a cop hangout, Theda can't help feeling a little jealous, though she admits she also has a problem with Bill's attitude—he's too patronizing. Meanwhile, contaminated cat kibble at the animal shelter run by her friend Violet may be the work of a poisoner. When Theda, guided by blood on Musetta's paw, discovers Rachel, a shelter vet, lying on the treatment-room floor with a fatal stab wound, she gets arrested for Rachel's murder. Well-drawn characters, a plot with many strings to unravel and plenty of appealing cats make this another winner for Simon.
– Publishers Weekly
Music critic Theda Krakow and her now hefty kitty, Musetta, are back in the fourth entry of the cozy cat series. In the running for a staff reporter job, Theda is pressured into investigating the poisoning of several of the cats at a no-kill shelter, which is how she ends up in the back rooms of the city shelter covered in blood, with a scalpel in her hands, and standing next to the body of the shelter vet. An otherwise solid mystery is made somewhat unbelievable when Theda is immediately arrested and charged with murder but has no contact with the cops after she’s out on bail. As usual, Theda uses her investigative-journalist skills to save herself and help the cats of Cambridge, all while keeping in touch with the rock-music scene and negotiating an increasingly serious relationship with boyfriend Bill. With lots of the story framed around Theda’s friends from previous books, this isn’t a great choice for newcomers, but it will please fans of the series.
– Booklist
Reviews 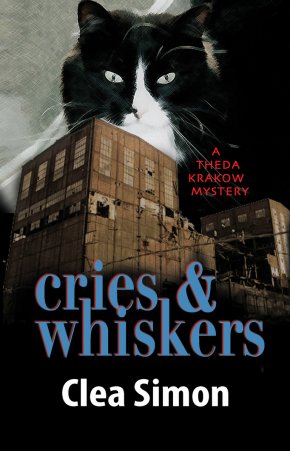