I first met Thomas Pluck through a mystery convention – are we seeing a theme here? He was moderating a panel (I think this was Bouchercon, New Orleans) that I was assigned to. I saw what looked like really tough, slash-em-up books, and thought, “I’ve got nothing in common with this guy. He’s not going to like me, either.” Imagine my surprise then, when I found him receptive and appreciative of my work – and a damned good moderator! And so I picked up his then-new Bad Boy Boogie and could not put it down. Yes, there was more blood and gore in a chapter than in the entirety of any of my books (when the hero picks up an ax, you know someone’s going to get beheaded…). But it was done with such style and humor, I ended up reading much of it out loud to my husband, and interrupting myself with laughs. It is with great pleasure, then, that I introduce Thomas Pluck!
How does a book start for you?
It starts as a daydream. An inciting incident of some sort, a character dealing with something strange. Bad Boy Boogie began with “what if you killed a vicious bully as a child, and if was the wrong one?” Blade of Dishonor began when I learned that Japan’s most treasured sword, a Masamune, disappeared in 1945. It has never been found. 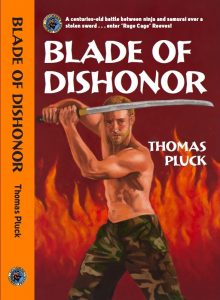 Who in your latest book has surprised you most – and why? 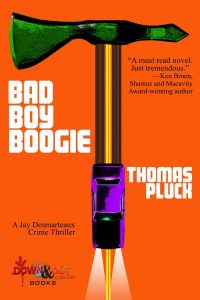 Bad Boy Boogie is my latest, my first Jay Desmarteaux crime thriller. It begins when Jay is released from prison after 25 years, when his juvenile sentence of Life Without Parole is commuted. He’s full of surprises, but his buddy Tony surprised me most. He was a bullied kid who can’t let go of the past, and Jay saves him from sinking into the darkness that scarred him.
When and/or where is your latest book set and is there a story behind that setting?
It’s set where I grew up, northern New Jersey, where the landscape changes from industrial wasteland to bucolic suburb in a matter of miles. Three stories I know of came together to make Bad Boy Boogie: a bloody hatchet murder, a good foster mother who had her adopted child taken away and returned to his abusive family, and a brutal hazing that was dismissed by school authorities as “locker room antics” when it was legally sexual assault. The suburbs only look safe.
What are you working on now?
I’m working on the follow-up to Bad Boy Boogie, where Jay returns to his birth state of Louisiana to help save his mother from her evil family. It’s called Riff Raff, and is inspired by a woman who shared her father’s deathbed confession, that as a Klansman, he and other white men would attack and abduct black men, tie them with barbed wire, and drop them in the swamp to drown. She dedicated her life to fighting hate and white supremacist terrorism. Louisiana is a beautiful state, and the north has its share of ugly racism, but the Southern past is not even past, as Faulkner said. I’ve been visiting for years and I’ve wanted to write a story of how one can redeem the evils their family has done. Riff Raff is it.
Which question didn’t I ask you that I should have?
With thousands of books released every week, why do I write and what do I have to offer?
I love discovering lost history and sharing it. Stories that get glossed over, or that towns want to make go away. I always regretted not choosing journalism, and this is my way of uncovering old truths and sharing them with the world, by turning them into entertaining fictions. 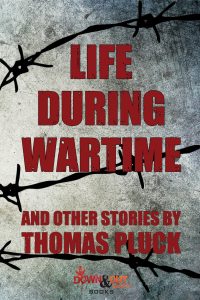 Thomas Pluck has slung hash, worked on the docks, trained in martial arts in Japan, and even swept the Guggenheim museum (but not as part of a clever heist). He hails from Nutley, New Jersey, home to criminal masterminds Martha Stewart and Richard Blake, but has so far evaded capture. His latest is Life During Wartime, a story collection that made Out of the Gutter say “this man can write.” He is the author of Bad Boy Boogie, his first Jay Desmarteaux crime thriller, and Blade of Dishonor, an action adventure which MysteryPeople called “the Raiders of the Lost Ark of pulp paperbacks.”