Musetta in the bardo

We didn’t plan on traveling so much. Some things simply work out.

For example, when I was writing The Feline Mystique, I intended it as a tribute, an exploration of the connection between women and cats. I never thought it would turn into a tribute to my own longtime pet, Cyrus. That the book would end up chronicling his life – up till then. And yet, it did.

And so, in September, as our Musetta was declining, I re-read the passage I’d written about the last days of Cyrus, our previous feline companion. After his death, I wrote, we had traveled fairly extensively. Our house simply felt too empty without the long-haired grey cat who had been first my companion and then a member of the home Jon and I built for more than sixteen years.

Musetta’s decline was much more precipitous than Cyrus’s months-long final illness. She did not come down to join us on Friday evening; on Wednesday, she was gone – and so the following few weeks had already been planned. At the time, with various outing already booked (a weekend in New York, Bouchercon in Toronto, etc.), I told myself the timing was a mercy. We wouldn’t have to leave her, as she had already left us.

On our first weekend away, 10 days after losing her, we visited friends in the Berkshires. They knew we were in shock and grieving, and let us choose the weekend’s agenda. But since we were there, and because art is healing, we went to Mass MoCA. There we saw an extraordinary exhibit by Laurie Anderson, “Forty-Nine Days in the Bardo,” a series of monumental charcoal drawings chronicling the passage of her late and beloved dog Lollabelle through what Tibetan Buddhists call the bardo. Lollabelle, as Anderson saw it, progressed through memories of music and toys, people and confusion. Ultimately, the little terrier with the big eyes moved beyond.

The bardo, I have since read, is the transitional, or liminal state, immediately following death. The 49-day period before a soul is reborn. For an evolved soul, it can be a period of great insight. Basically, you revisit your past life and may learn from it. Then… you move on.

I’ve found this idea greatly comforting. Partly, that’s because I keep “seeing” Musetta around the house. A bag left on the floor and I start. A shadow under a table, only that shadow doesn’t materialize into a black and white kitty, readying to leap up onto the sofa. I know this is common after a loss: our nervous systems take time to adjust. We see what we expect. We mourn. We miss our kitty, the soul of our home. That it also fits with the idea of the bardo – that our kitty, as she transitions, is revisiting her old haunts, learning, evolving, and ultimately readying her soul to follow her body into a next stage – comforts me. She is still here, for a time, anyway. Something of her is still making her rounds.

The concept of the bardo also works for me in its timing. Immediately after Musetta died, we were in no state to properly mourn her. As our vet said, she was ready – but we never would be. We certainly weren’t then, and it was hard to even wrap our minds around the rapidity with which she went from an involved member of our household to nonexistence. But tomorrow, Nov. 8, is the 49th day since her death – the end of her time in the bardo – and, maybe, her absence has begun to sink in. And, as was planned long before we knew Musetta would be leaving us, I’ll be traveling again, alone this time – to a reading at the Mysterious Bookshop, while Jon must be at work.

So, tonight we will light a candle. Take some time to think of our dear companion, the spirit of our home. Tomorrow, I go to New York, and Musetta goes – on. As do we all. 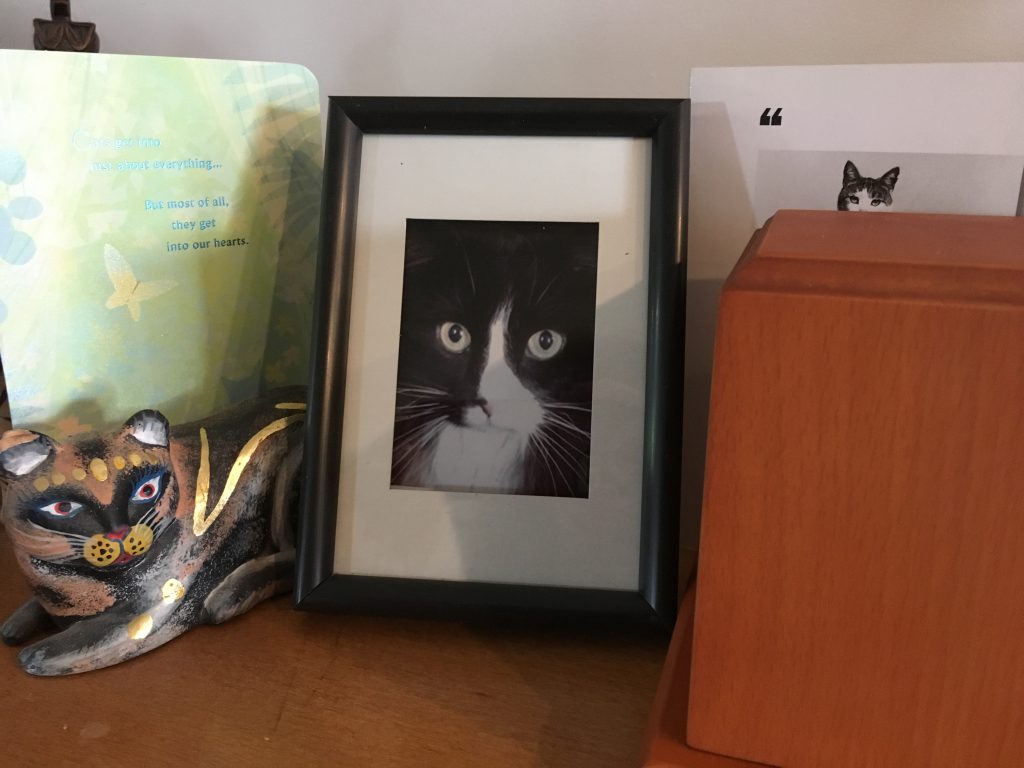